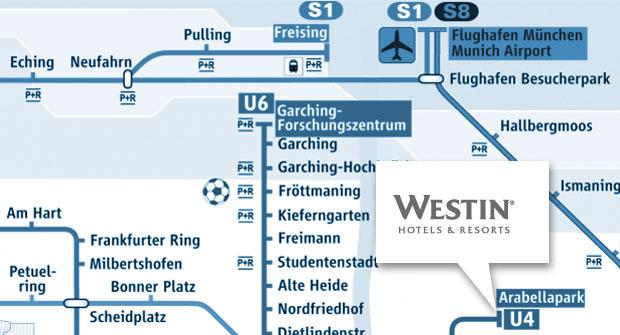 The easiest and fastest way to travel in Munich is by either taking the urban train (S-Bahn) or the underground (U-Bahn). Especially in the city's inner area (called Innenraum, the white inner zone on the map), there's barely any need to take the tram (in German called Strassenbahn) or the bus. For instance, the distance from DrupalCon's conference hotel The Westin Grand Munich to the closest tube station – U4 terminus station Arabellapark – is just 500 metres.

Central Munich is ideal for exploring by foot, or, why not make use of the excellent efficient public transport system. The city's public transport system is one of the best worldwide indeed as it is based upon a unique parallel concept. Within the Innenraum (white inner area/zone on the map), six different urban trains circle from west⇒east and east⇒west in a parallel manner — which means you can catch an urban/suburban train almost every three minutes.

Munich's public transport is organised via MVV (Münchner Verkehrs- und Tarifverbund) and is a zone-based system. One ticket fits all: S-Bahn, U-Bahn, tram and bus! Usually, the best idea for tourists and short-term visitors is to get the white-blue striped multi-trip card called Streifenkarte (Stripe Ticket) for € 12,00. The Streifenkarte provides ten stripes (stripe = Streifen) and enables you to travel with two stripes for a maximum of three hours in one zone (usually the inner white zone), which costs € 2,40. Ultra short distances up to two stations cost € 1,20 only.

The white-blue Streifenkarte is also very flexible. Single as well as group/couple usage are allowed — changing the train and interrupting the journey are too, but return and round trips are not! Just remember: you must stamp the striped card before every journey!

If you plan to do plenty of travelling, you can buy a day pass for one zone called a Tageskarte which costs € 5,60 (single person), or a three-day pass for € 13,80. A one-day pass for all the zones (similar to the Airport-City-Day-Ticket, which is highly recommendable for the arrival day) costs € 11,00.

Where to go and what to do

We arranged a tour around Munich with sightseeing spots, restaurants, coffee shops, hangouts, cinemas and more in this Pinterest board.